You are here: Home / blog / 10 Ways to Add Humor to a Serious Workplace 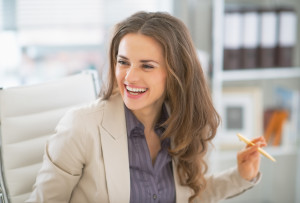 Jennifer was a customer service representative for a large technology firm. Though her dreams and aspirations never included sitting in a padded cubicle listening to rude customers, that’s what she did for eight hours a day. Usually, the problems were related to consumer ignorance, and she would patiently instruct them to put in a battery or plug the device into an electrical outlet. To keep her sanity, she used a collection of finger puppets on her desk and pretended the callers were puppets. Then she could see and talk to the clown or the pig or the snooty lady bouncing on her finger. She used humor to survive.

From Shakespeare to the comic strip character Dilbert, ordinary characters rely on comedy to endure the struggles of life and death. As Mercutio lies dying in the tragedy of Romeo and Juliet his last words are, “A plague on both your houses! They have made worm’s meat of me!” Then he laughs and dies. That’s a morbidly funny line. Worm’s meat? Would that really be a man’s last thought? Shakespeare is playing with the audience so the tragedy won’t be too horrific.

In the passionate and wildly popular Broadway musical Les Miserables, we’re exhausted as we witness the endless pain and terrible turmoil of characters who just want to live one more day to fulfill their destiny. Then just before we sink into a deep depression, the drunken innkeeper and his wife burst onto the stage with a hilarious rendition of “Master of the House.” The audience cheers with gratitude for the temporary emotional reprieve.

In a favorite Dilbert cartoon, the intern Asok is killed and reincarnated as a candy bar. Office workers can relate to Asok, but the episode made us laugh anyway. Why? We’re amused because nothing diffuses daily drama like a boisterous belly laugh. Studies prove laughter can reduce stress, increase creativity and lessen tensions. Happy people are healthier than crabby people, and they’re a lot more fun to be around. Jovial people can tackle problems with a positive attitude while pessimistic whiners only take up space while wasting time and life by drafting hate mail and threatening law suits.

Just in case you meet or work with nasty people who only exist to bring pain and suffering to the world, here are some suggestions for using humor to diffuse stressful situations.

1. Before going to a serious meeting, walk by an outside playground and listen to the laughter of the children. Try to recapture that exuberant feeling of having fun. You don’t have to install a swing set in your office to remember how it feels to swing high and almost touch the clouds.

2. Cheerfully empathize with people who drive you crazy. Maybe the coworker who criticizes your work has an intolerable life at home or is caring for a sick child. That would explain his or her irritating behavior. Or, the coworker could just be truly obnoxious and you should stay away from them as much as possible.

3. If you’re in a tense meeting and tempers are flaring, stand up and wave a white flag. Threaten to send everyone to “time out” if they can’t get along. Your boss may not approve of your actions, but it could lighten the mood.

4. If you’re unfortunate enough to be placed on a rigid committee that can’t find consensus on anything, carry a jester’s hat in your briefcase. As emotions escalate and you’d rather break for lunch, just don the hat and announce that you are Feste the Fool of Shakepeare’s Twelfth Night. Dramatically sing his immortal line: “Come away, come away death!” You’ll all be laughing your way through the lunch line.

5. If you’re cursed enough to be deemed in charge of the office holiday party, know in advance that you cannot please everyone and that you are doomed to failure. Just emulate the television show Seinfeld. During one politically correct episode, they organized a “Festivus for the Rest of Us” party where they celebrated nothing. It worked.

6. Share the joy by driving to work wearing a clown nose. At the stoplight, look over and smile at the people in the next car. You’ll brighten their day because they’ll laugh on their way to work, or else they’ll report you to the police. That’s OK because the noses come off quickly.

7. Employ popular tricks and tactics that you use with your family to improve negative situations at work. If your assistant gets an important report done on time, give him an extra-long lunch hour. Legal bribery works wonders, and you’re both happier.

8. Never forget that there are people who want you to be miserable. They may want your job or your car or your spouse. They will publicly criticize you and make your life miserable. Just laugh at the situation and be thankful the person isn’t your parent. However, if it is your parent, get some professional therapy.

9. Never forget that there are people who want you to be happy. You should belong to some social, professional or civic organizations where you can mingle with supportive people who share your values, skills and aspirations. Just ignore Groucho Marx’s famous comment that he would never belong to a club that would have him as a member.

10. Silence is goal-oriented. While it can be fun to slay the competition with a well-placed witticism, sometimes it’s best to pick your battles, remain silent and allow the adversary to publicly prove that she’s a fool. If she goes into a tirade, concentrate on her left ear and imagine it’s a donkey’s ear. You will look cool, calm and collected while she self-destructs faster than the Wicked Witch of the West. You can make your sly comments after you’re promoted.

The best advice is to know that if you’re wallowing with the pigs, get out of the sty. You don’t have to tolerate uncomfortable, hostile or abusive treatment, and if you’re not occasionally laughing at work, you can’t work. Consider a department change or pursue educational opportunities for advancement. If you’re going to live to be 100, you might as well enjoy the journey. And don’t forget to pack your sense of humor.