You are here: Home / blog / Choose to Cause a Positive Ripple 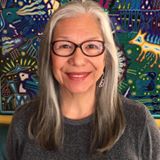 (My guest blogger today is Ophelia Ramirez, creator of an Act as One movement that promotes unity through love and respect. Find more information on this Facebook page.)

I’ve been thinking much lately about the crazy level of unkindness in the world and how overt it seems to be these days. I’m not sure if it’s really more overt, or whether, thanks to technology, it’s simply more accessible, more obvious.  Whatever the reason, it is in my/our face on a daily basis. It’s all too easy to collapse into despair, to bemoan the bygone days of decency that I believe are largely seen through rose-colored glasses.  Still, it needs to be acknowledged that in this time, hate, unkindness, vitriol, are prevalent.

And yet, I believe that we are all on this planet, all at this time for a reason.  Marianne Williamson once said in response to a person asking why we needed to do anything if it’s all an illusion anyway, “ It’s up to us to transform the illusion, to change it.”  (I put quotes around that to denote her words but it may not be exact).  The point is that it is up to us to change our reality.  It is up to us to change ourselves first and by doing so change others.  This is the only way the world changes.  This is not a naive platitude.  After the Paris bombings, the Dalai Lama responded by saying that it is futile to look to governments for the answer.  He said any meaningful change will come from individuals changing themselves.

There are many instances where big changes happened because one person had the courage to step forward.  We can easily think of many famous people who had the courage to make a difference: Mahatma Ghandi, Rosa Parks, Oskar Schindler, Steve Jobs – yes, they all had many people backing them up but they had the initial spark and the courage to act on it. If you are like me, and really, like most of us, we ask ourselves how can I make a difference? What could I possibly do that will make a dent?  Well, think of all the people in your life who have changed you in some way.  Maybe it was something they did. Perhaps they said something that affected you more than they will ever know.

Now think the reverse of that: how many people have you influenced? What kind word or act of yours helped others?  We interact with many people each day: family members, clerks, fellow employees, people on the road, grocery store personnel, the list is long.  We all have an opportunity to each day to touch the lives of many.  As the popular meme says, “Being kind costs $0.00”.

Our every action has a ripple effect – we can choose to have our ripple be one of good. I invite you to join me in making waves that will change our world for the better.

Send me a post or a video of how you are sending out ripples for change or of how someone else’s actions has affected you; I will post them on my site.  My email is: ophelia@act-as-one.org