You are here: Home / blog / Forget Kinky – Bring me Coffee and Kisses 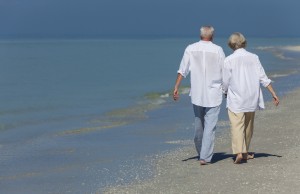 The National Retail Federation predicts that $18.6 billion will be spent this year on Valentine’s Day gifts that include jewelry, flowers, candy, and greeting cards. However, many middle-aged couples ignore the hype and prefer a nice dinner with fine wine, a slow dance on the patio, and a tender look that says:

“I will love you forever. Have you seen my dental floss?”

The Valentine’s Day edition of a popular women’s magazine recently offered some provocative advice about how to drive a man crazy by using naughty tricks that involved handcuffs and blindfolds. At midlife, most of us don’t have time or money to waste so we’d rather dim the lights, turn on some Luther Vandross, and holler “Come and get it!” before it’s time for the evening news and some salve on our aching backs.

The passing years have provided us the wisdom to know that if we donned a skimpy outfit smaller than a hanky and then wore a blindfold we would trip over our wobbly stilettos and smack our head on the nightstand. And if we lit 50 candles and then agreed to handcuffs we’d knock over the candles, start the house on fire, and not be able to find the key to the cuffs. Our friendly firemen would be greatly amused and publish our hapless photographs in a local magazine.

Most middle-aged women are strong advocates for romance but we want and need it more than once a year. We prefer daily acts of devotion that can build a lasting love affair. My sweetheart makes my coffee every morning and brings me the newspaper. (Yes, a morning newspaper proves just how old we are.) He laughs at my jokes even though he’s heard them before and they’re really not that funny. And, he kisses me every night and morning. We touch in our sleep, and that is the essence of pure love. 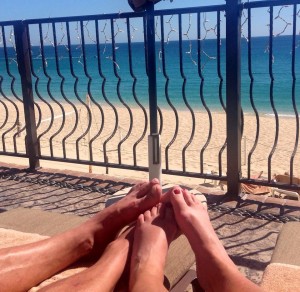 I don’t mind trying new amorous adventures, but they often come with humorous and unromantic results. The kitchen table was way too hard, the secluded outside picnic came with ants and stickers, and the tight corset took 30 minutes to remove. Once I arranged for a limousine stocked with Scotch and hot wings to pick up my hubby from the airport, but the limo was late and he stood outside in the freezing cold for twenty minutes. Another time I applied some sensuous massage oil but ended up spilling the entire bottle and ruining our best sheets. It took him two hot showers to degrease.

But, I’m not giving up on passion because it’s just too much fun.

Millions of people over 50 enjoy loving relationships, and they now comprise the biggest group in online dating. According to the Mayo Foundation for Medical Education and Research, sexual health is important at any age, and doctors agree that older couples who enjoy sexual intimacy can lower their blood pressure, reduce the risks of heart attacks, and look years younger. According to my close female friends, a festive romp in the hay is a grand way to end the day, and there is no medical study required for that astute observation.

As millions of American women grow closer to age 60, we no longer relate to the role models of yesterday. We reject the weathered images of the late Irene Ryan who was only 63 when she played the role of Granny Clampett in the television series Beverly Hillbillies and prefer the strong image of 65-year-old movie star Meryl Streep. We love the feisty spirits of sexy senior citizens Betty White and Tina Turner. Television legend Joan Collins is 81 years young. At a recent pre-Grammy party in Beverly Hills she said that sex was better than Botox for slowing the aging process. In response, many of the glamorous guests weren’t able to raise their eyebrows with surprise.

This year, forget the potions, purchases, and promises for the perfect Valentine’s Day. Be grateful for daily gestures of love and let him know in advance that you’d rather have a nice bottle of wine and a back rub than a 4-foot Vermont teddy bear. Really. Those things are scary.