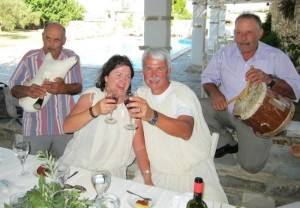 The wedding invitations are arriving, and I study each one using analytical, investigative skills that could qualify me for a reality show as an oracle. Future bliss or pending doom can be detected from the aura of the invitation. Here is some unsolicited but free advice from someone who has been around the punch bowl a few times.

1. Tiny script surrounded by gaudy illustrations of flowers, birds, and glittery ribbons means the couple is too young to get married and should opt instead for a Hello Kitty theme party. If I can’t read the words and the return address, I certainly can’t send a gift.

2. Don’t fill half the invitation by naming all the parents, step-parents, and significant others. We don’t care.

3. Don’t send cute but obnoxious invitations from your kids or pets or attorney. We can’t be fooled.

4. Don’t ask for money in lieu of gifts. I don’t need any more bills in the mail, and I’d probably send a check anyway but I want that to be MY idea.

5. After the second wedding, don’t send invitations to the sequel unless you’re providing a catered banquet and open bar. We’ll come for that.

6. Most midlife marriages are best announced after the ceremony and include an invitation to a joyful, raucous party that ends before midnight because we can’t dance until dawn anymore.

My husband and I met after we had raised children, established careers, and knew how to manage money. That means we had distinct advantages over most young couples. And, there were no in-law issues. Our one living parent has dementia and can’t remember our names, anyway. 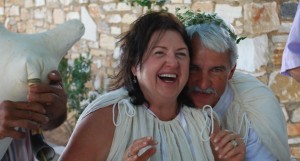 Instead of attempting a traditional marriage, we eloped to the Greek island of Paros and stayed in a quaint resort near the Mediterranean Sea. Our hostess arranged an ancient wedding ceremony, complete with linen togas, laurel wreaths on our heads, and a priest who couldn’t speak English. Music was provided by a little one-eyed musician playing a goat bladder.

After the ceremony near a chapel overlooking the sea, we proceeded back to the resort. (Yes, I love the movie “Mama Mia” but we chose not to sing to each other on a narrow, windswept cliff.) Wine flowed and platters of homemade food passed among strangers who stopped to join the festivities. The resort owner gave us white almonds tied in mesh bags, saying in broken English that the gifts were usually given to encourage fertility, and we promised to keep trying. We ended the evening by dancing and laughing with people we’ll never see again.

Our wedding was perfect for us. The expenses for the trip were less than the cost of a traditional wedding, and we didn’t need any toasters or towels. Our grown children were sad they missed the event, but someday we’ll take them all back to Paros. I hope we can find the delightful musicians. Every marriage should be blessed with an authentic ballad played by a little one-eyed man with a goat bladder. That tradition has survived for centuries in Greece, and we know that, finally, our marriage will last, too.