You are here: Home / blog / Public Breastfeeding can be Expressed in Good Taste 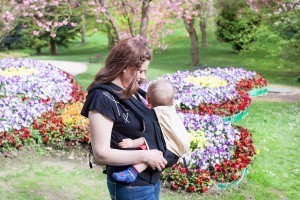 I recently attended an elegant wedding at a seaside resort where the gift table and the guests were well-endowed. However, there was some engorged indignation at the reception as two perky women nursed their babies without discreetly covering the bobbing heads of the darling sucklings.

One of the bridesmaids conveniently wore a strapless gown to easier facilitate the moveable feast. Reaction to the public display of liberal lactation ranged from frothed and pumped up annoyance to flowing praise for the natural and healthy nourishment between the mother and child reunion.

It sucks to be criticized for using a supply on demand device for its original purpose.

“Oh, my, I must warn Harold not to go over there,” a woman muttered to a group of older guests with permed hair, lace hankies and sensible shoes.

“I haven’t seen this many bare breasts since I watched a National Geographic documentary about African tribes.”

“In my day we discreetly fed our babies under a blanket, and my mother hired a nurse maid for her children,” snorted another lady.

The younger crowd seemed nonchalant and didn’t latch onto the uncomfortable tension that leaked into the room. They laughed the night away, draining jugs of wine until they acted like boobs.

To insure that the event wasn’t a total bust, they danced through the spot so the hooters could hoot, the knockers could knock, and the stranded friends could wean themselves away from the dried up and sagging patrons. In a final tit-for-tat, the young adults pulled the older folks out of their bondage and onto the dance floor to lift and separate their drooping spirits.

By then, the contented babies were asleep and the milked mothers had a few hours to pad themselves and dance the Fandango until the cows came home. That way, they could have their wedding cake and eat it too.

The best formula for enjoying a special occasion that involves young couples is to anticipate the appearance of at least one nursing mother.

Offended people can choose to avert their attention to the drunken uncle or the pouting teenager, or the Rod Stewart impersonator in the band. The public nursing only lasts a few minutes and the alternative is to hear a screaming baby and witness a swollen mother in pain.

I nursed my two babies each for a year, and it was a rewarding experience. I never walked around in public hooked up to the little buggers, but I don’t disapprove of those who do. There are far too many neglected babies who hunger for the affection and attachment of loving mothers.

After my children were grown, I cleaned out the house and found a little bottle of breast milk saved in the back of the basement freezer. My younger child was 18 years old and didn’t need it. I couldn’t throw it away so I lovingly placed the bottle into a velvet Crown Royal pouch and buried it under the rose-bush in the back yard. I probably need counseling for that.