You are here: Home / blog / The Joys of Traveling with Children (Over Age 30) 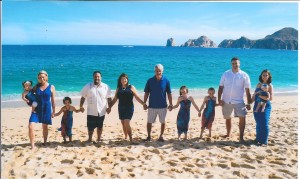 Here’s a little levity on the downside of traveling with kids and how best to lie to them when the situation calls for it. This guest piece from Elaine Ambrose originally appeared at The Huffington Post.
If given the choice between traveling with small children and having a root canal, I’d be at the dentist office sucking laughing gas before noon. I adore kids but the logistics of getting them more than 100 miles is too much to endure unless they can be shipped like golf clubs or crated like pets.

After my baby filled his diapers with an adult-strength load during takeoff on a three-hour flight, I finally realized there was no reason to ever travel with youngsters. At least not in the same airplane.

Children under five years old don’t know what a vacation is, so tell them that the city park is just like Disneyland except without grinning pirates shooting guns, drinking booze, and chasing women on the Pirates of the Caribbean ride. Better yet, turn on the sprinklers in the backyard, sit down with a glass of wine, and watch the little darlings giggle and wiggle until they’re tired enough for a nap. Then invite your hubby to swill some whiskey and chase you around the yard. Yo ho ho! Everyone will be happy and you’ll save thousands of dollars. This is a win-win situation.

Traveling with little children requires parents to lie in order to survive the ordeal. Here are a few of my desperate but necessary distortions of the truth I coughed up while attempting to orchestrate the illusive perfect family vacation when my kids were under ten years old.

Driving in rush-hour traffic near Disneyland.

“Of course, it’s okay to pee into a potato chip can, Honey, because it’s against the law to get off the freeways in Los Angeles.”

Trapped at the airport during another flight delay.

“Please stop whining and you can have a new puppy/pony/playhouse if we get home before you’re in high school.”

After four hours of driving through a desolate desert.

“Stop hitting your brother/sister or I will park this car right now and we’ll live off the land and eat scorpions until you can learn to behave.”

After two hours of “Are we there yet?” and “How much longer?”

“Sorry, kids. Mommy is going away for a while.” Then I would pull over, stop, and play dead. Worked every time.

I still mutter like a curmudgeon when I see young parents in airports juggling a small mountain of luggage that includes diapers, food, enormous strollers, DVD players, toys, and clothes that could stock a child care center. My ancestors walked for months to Idaho along the Oregon Trail, and their kids and clothes were bathed once a week in the river, air-dried on a log, and stored in the wagon for the day’s journey. They survived just fine.

Imagine if any pioneer child had complained:

The first time I saw the movie The Sound of Music I yelled “Fraud!” at the end as the family climbed over the Alps singing in perfect harmony in clean clothes. When my kids were little, we couldn’t walk from the house to the car without someone falling headfirst into a mud puddle. And forget about taking a hike together. Any incline more than two inches would cause howls of dismay with repeated pleas to be carried. And that’s when they were teenagers! But, in deference to the movie, if evil Nazis were chasing us, we would manage to escape together, with or without matching lederhosen.

One splendid advantage of getting older is that family trips are easier and less hectic. My kids are in their thirties and have their own children to handle, so I just need to pack yoga pants, t-shirts, and a wine opener. We recently traveled with 11 family members on a week-long vacation. I was overjoyed to play with the grandkids and sing songs and tell stories. Then came Happy Hour and their parents could take over. As they walked away with the boisterous brood, I overheard one of my adult children say, “Stop hitting your sister or we’ll go live in the desert and eat scorpions until you learn to behave.” My work here is done.