You are here: Home / blog / A Love Note to my Internet Trolls 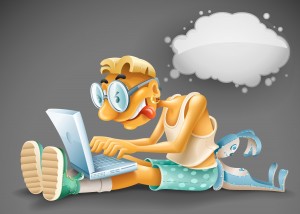 As a syndicated blogger, I’m accustomed to receiving unsolicited remarks about my posts on various social media websites. Regular readers know I write humor targeted to middle-aged women, and they anticipate a certain level of sassy irreverence. It’s a role I enjoy, mainly because I can write from home while wearing pajamas and sipping wine.

The last few days, however, brought new extremes of praise and punishment for my writing skills. The copious compliments were tempered with caustic criticism, almost enough to crush my delicate soul.

Four of my essays were published last week on the Huffington Post. My only serious piece was about my ailing mother and titled “If My Mother Died Today.” http://www.huffingtonpost.com/elaine-ambrose/caring-for-elderly-parents_b_5979904.html

The post received almost 1,000 favorable likes on Facebook and many middle-aged caregivers wrote to thank me for giving a voice to their feelings.

In the essay, I wrote about playing Tennessee Ernie Ford’s spiritual music for my mother when she was in critical condition in the hospital. I ended the piece with Ford’s familiar saying, “Bless your pea pickin’ heart.” The next day I received a touching email from Ford’s daughter-in-law. She loved the blog and offered to send me some of Ford’s spiritual music. I requested “His Eye is on the Sparrow,” one of my favorites. She responded that she was sending a 40-song collection. I am honored and humbled.

The message was an exasperated, satirical plea for manufacturers to increase the size of print on products so middle-aged women wouldn’t need to wear eyeglasses in the shower to decipher the shampoo from the conditioner. The responses came immediately. One person offered to send me a free pair of “Thinoptics” – a pair of reader glasses in a cell phone case. I accepted. Another offered me a deal on Lasik eye surgery. I declined.

The essay received more than 2,600 likes on Facebook, 344 shares and 160 comments. I’ve only been blogging on HuffPo for a month, so the response was exciting. But I was unprepared for the vitriolic assaults. Here are some of the published comments:

“This was supposed to be humorous? Well, keep on trying.”

“”Another female problem to kvetch about.”

“We already cater too much to Boomers.”

Additional comments deteriorated into attacks about misplaced priorities, gay rights, and trolls living in basements. I answered a few but then stopped because I didn’t want to get down to their level. I peeked back the next day and found more than 100 positive comments, so I felt better. Still, I wondered what possessed a man (yes, most of the mean comments were from men) to make nasty comments on a humor column targeted to middle-aged women. With all due respect, bless your pea pickin’ hearts but take your sorry asses and go troll somewhere else.