You are here: Home / blog / A Bedtime Story about Handicaps 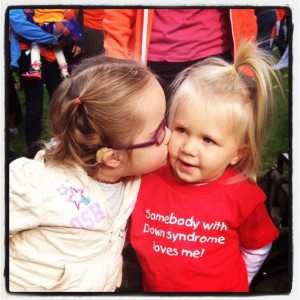 Once upon a time, there was a magical little girl. She brightened the room when she tumbled in, boisterous and full of energy. Then without hesitation she proceeded to share fierce hugs and sloppy kisses with everyone regardless of who they were, what they looked like, and what titles and possessions they owned. All shared equally in her unconditional love.

Some said she was handicapped. A few didn’t return the affection. Others mentioned their worries about her future. But, most responded with joy because hugs were fun, and the world was in desperate need of genuine acceptance without prejudice. For only four year’s old, she had more power and direction than the leaders, the agitators, and the misguided media messengers.

One day the little girl heard people shouting in anger, and she curled up on the floor, covered her face, and cried. She couldn’t understand meanness and revenge. She didn’t know why there were images of hatred and intentional destruction. Her world was supposed to be safe and happy. The public rage broke her heart, and she wondered why so many people were handicapped so much that they couldn’t love.

So, she dried her tears and did what she did best: she found someone to hug and kiss. And, her actions became a strong and pure example of what all the mad people should be doing. The little girl she hugged then ran off to hug someone else. They, in turn, spread the positive action to others. Soon, the family, the community, and the entire region stopped their frustration, ended their hostility, and softened their bitterness to bask in the happiness of hugs and kisses.

That night the little girl cuddled in bed, not knowing or caring that she has changed so many people. But, she slept peacefully without regret or worry. And she woke the next morning to share her healing hugs all over again.