You are here: Home / blog / Airport Bathrooms can Drain Your Soul 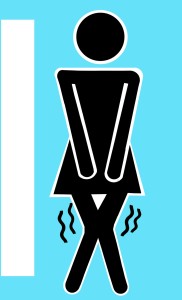 As a frequent traveler through life and space, I often have the need to use a restroom in an airport. Such necessary actions require tenacity, humility, and tolerance, human attributes that may not eagerly spring into action after sitting four hours on a plane with a middle-age bladder.

Airport bathrooms were designed by evil people who hate women. Schlepping my carry-on luggage, I get in line for the women’s restroom, and woe to anyone who takes cuts. Once inside, I join others who resemble a herd of bowing, pack-laden peasants as we peek under doors to find an unused toilet. I wrangle two plump pieces as I wiggle inside the stall then pull the luggage tight to my body so I can close the door. Then I shift the ensemble against the door so I have room. I dutifully place the tissue ring around the seat but usually the automatic flusher operates and pulls the tissue down even before I can sit.

I don’t dare sit down without the tissue because the woman before me decided to save time by squatting and spraying the entire seat. So, I straddle the toilet, pull down another tissue, quickly slap it onto the seat and try to maneuver into position before the flusher goes off again. The same thing happens. It’s not a pleasant or quality use of my time to be trapped into a crowded stall with my pants down while screaming at a commode that continues to mock me by flushing on a whim. I suspect demented staff members are operating remote control flush switches and arbitrarily decide which hapless women to torment. I look around for hidden cameras and notice there isn’t any toilet paper.

After a woman successfully manipulates the toilet, then she must wrangle the luggage back out of the stall, stand in line for the sink, wave her hands under the sporadic soap dispenser and hope it works, wash her hands and then find the towels which are inexplicably across the room in a corner next to the woman washing her feet in the sink. Then she throws her used towel into the waste receptacle that reeks of soiled diapers.

Meanwhile, male travelers saunter into their restrooms, whip out and empty their hoses without needing a stall, wash their hands, admire themselves in the mirror, chat with the guys, and are on their second beer at the bar by the time the women straggle out of the bathroom, dragging strips of toilet paper on their shoes.

“What took you so long,” a naive man will ask, but only once. After a recent long-distance flight, I pranced to the nearest bathroom only to find it closed. Why can’t the maintenance people schedule their cleaning routines around arrival times? If they know a plane loaded with 200 people is landing in 30 minutes, by all means get into that restroom and tidy up because there will be at least 100 females making a stampede for the four available stalls. And, a closed restroom could result in desperate women marching into the men’s room. Been there, done that, didn’t care.

A few times, I’ve enjoyed the privilege of a privy in an airline’s executive lounge. The women’s restrooms are spacious and clean, and have real towels and free breath mints. There aren’t any lines, the stalls are big enough to host a cocktail party (not that you would want to do that), and the automatic flushers politely wait until you have finished your business. Obviously, these facilities were designed by distinguished women who travel.

Caveat #1: Now that this rant has washed away, I’d like to acknowledge the wonder of flying. This week I sat in a chair in a tube with hundreds of other passengers and flew at 38,000 feet over the Pacific Ocean. There were 100,000 flights that day, and thousands of people traveled through airports. The common ordeal of finding a lavatory pales in comparison to the glorious ability to seek adventure and not bitch about inconveniences.

Caveat #2: I’ve enjoyed opportunities to travel the world, and each exotic place comes with customary bathroom facilities. In India, our modern rest stop included a room with a tile-lined hole in the ground and two foot rests. In Nepal, we used a log over a ditch. One facility in South Africa offered a room of toilets without partitions or toilet paper. Many locations and homes in our own country still use outhouses. I recognize my comic rants as First World problems, and I’m grateful for indoor plumbing. Now, onto the next adventure.