You are here: Home / blog / Are You a Victim of CRAP on the Internet? 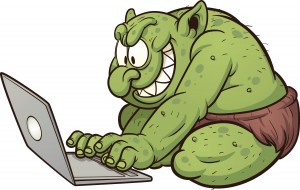 I have CRAP Disease, a malady that stands for Compulsive Reader of Angry Posts. I know that certain messages on social media will cause sniveling trolls to wake from their burrow in the basement to slobber over their keyboards, grunt with excitement, and feverishly hurl illiterate, nasty, and incoherent comments. I start to read them anyway, even though I’ll regret seeing proof that colossal fools live among us and threaten to rot the fragile fabric of civilization.

CRAP disease can infest your soul and leave you a cynical, bitter wretch full of CRAP. Be careful, or you also could become a victim.

Here’s how to determine if you’re susceptible to becoming a Compulsive Reader of Angry Posts.

If you need a CRAP fix, you can dabble in the occasional comment, but be ready to take some vomit-inducing drugs to purge your mind and body of the offensive swill. For example, recently a local television news station posted a Facebook message about a tragic accident where a bicyclist had been hit and killed in traffic. Here is an excerpt from one of the prolific commenters:

I shouldn’t be so critical, but it’s remarkable to have that many errors in such a short comment. And, as usual, the troll snorted that the rest of us were as “dumb as a bag rocks.” Obviously, my CRAP sensor intensified after reading this and I needed medication to recover. I shut down the computer, poured a glass of wine, and enjoyed a quiet evening free from trolls. Bahahahahahaha.