You are here: Home / blog / Buried in the Nice Robe 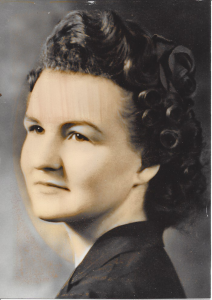 My mother died yesterday. She was 87 and her health had been failing for several years, she was confined to a wheelchair and lost in dementia. Her passing brought a wide range of feelings, from relief to sorrow. As her designated power of attorney, I had the duty to make the final arrangements.

“What do you want her to wear?” the gentle woman from Hospice asked as she took notes.

“The nice robe,” I answered. “With the pearl necklace.”

The woman stopped writing and peered at me, unsure of what I had suggested.

“You want her buried in a robe?”

So I told her why. In 1969, my father traveled to Japan on a business trip and brought back an elegant silk robe as a gift for my mother. They had been high school sweethearts; he was the gregarious student body president and she was the timid valedictorian. He wasn’t one for giving gifts, and she wasn’t comfortable accepting them.

Over the past 45 years, I have asked her why she never wore the robe, and her answer always was the same: “It’s too nice.”

That’s how she lived, protecting special objects in her life that she never felt worthy enough to enjoy. She never burned the fancy candles so they melted in storage. The good china dishes and silverware only came out at Thanksgiving and Christmas. And, she saved and reread every birthday and holiday card she ever received. (I have inherited this trait, and it’s a tough one to break.)

To arrange for her service, my to-do list is filled with complicated assignments. How do I get the headstone engraved? It’s been waiting at my father’s grave since 1989. How do I condense her amazing life into a 300-word obituary? Should I request that in lieu of flowers, people can contribute to the scholarship she established at the University of Idaho? The donation would be nice, but she also would love the flowers. She’d say she didn’t deserve them and they were too nice, but she would love flowers. The only easy decision I had to make was what she would wear for her final outfit. Two weeks ago, I had the robe professionally cleaned and ready.

She’ll be wearing the nice robe for the first time at her funeral service next week. And she’ll have on pearls. She always wore pearls, even with her favorite cozy sweatshirts ordered from the Country Living catalog. She’ll be beautiful.