You are here: Home / blog / Don’t Vomit on a US Senator 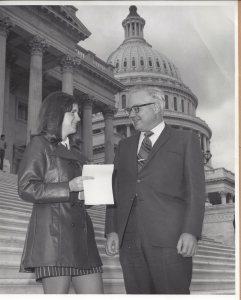 “Have you ever been on live television before?” the KMVT-TV news director asked.

“Yes,” I answered. It wasn’t a lie. When I was five years old I had been a guest on the children’s show on KMVT with the host named Happy Holly. In college, I had concentrated on print journalism and had taken only one required class in Radio-Television but had never participated in a live interview or telecast.

I drove to the station in Twin Falls and asked for a job that didn’t exist. At the time, I was full of young naivety that I could do anything. The news team and the station manager asked me to read for the camera, and I performed as if I knew what I was doing. That day I was offered a full-time job at $450 a month with a raise in three months. With that, I became Idaho’s first female television news reporter and talk show hostess. It was 1973, and I was 21 years old.

The station in Twin Falls provided the only television channel in southern Idaho, and the nightly newscast attracted more than 30,000 avid viewers. Twin Falls was not a major market, but it was my start in business and my first full-time job. I loved it. 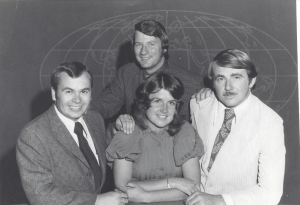 Only one month after college graduation I was holding a microphone and interviewing Idaho Senator Frank Church. Another time, I interviewed Congressman Orval Hansen on the steps of the nation’s capital. For the first time in my life, my parents no longer referred to me as the Problem Child. Instead, I became the television personality they personally had molded and supported from birth. The blinking red light on the top of the live studio camera became intoxicating with its access into homes and businesses I would never see.

I learned on the job how to load film into the camera, set it on a tripod, rush in front to interview a guest, then turn off the camera, drive back to the station, develop the film in the dark room in the basement, write the script, and deliver the news live on the air. I scoff now like a crusty curmudgeon when I see elaborate news teams with multiple employees dashing about performing tasks I did alone. 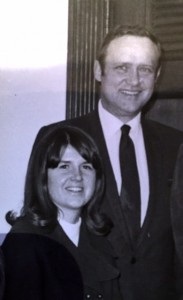 One harrowing news assignment still makes me queasy. I traveled in a helicopter with Senator James McClure, a nationally recognized leader in energy and natural resources. Our job was to tour wilderness areas in western Idaho in support of the senator’s campaign to preserve the Hells Canyon Recreation Area. In addition to interviewing the senator, I also filmed the excursion with an old Bolex camera using black-and-white film. I had no formal training in filming, but had learned by watching the other newsmen. As the helicopter took off and rose straight up, I pointed my camera out the window and began filming.

That’s when I learned about vertigo and nausea. The erratic motions of the helicopter combined with the focus on filming made me nauseous. I blinked back tears and swallowed hard to quell the disruption from my stomach. Suddenly the helicopter lurched and I lost my composure and my lunch. A ghastly stream of soupy vomit spewed from my mouth onto the senator’s expensive trousers. For one brief but terrifying moment, our eyes met and there was no affection between us. Only puke.

“Throw me out,” I begged, dropping the camera and wiping my mouth with the skirt of my favorite blue dress.

The senator and his assistant grabbed some tissue paper and attempted to clean up the mess. The co-pilot tossed back a towel and I buried my face, wondering if I should play dead. The stench in the small craft became overpowering, and I vaguely remember hearing the pilot announce that we needed to head back. It seemed to take five years to return to the airport.

I rushed to my car and drove to my apartment where I threw away the dress, climbed into the shower, and tried to wash away the evidence of being a loser. Vomiting on a United States Senator was not included in my job description. I returned to the television station without the camera or my pride.

Years later, Senator McClure and I became good friends. He excused my outrageous conduct and said he’d seen worse behavior in Congress. He also joked that I’d given new meaning to his memory of Hells Canyon.

Those early days of television provided the opportunity to meet many important people, from the Sheepman of the Year to volunteers trying to improve living conditions for local migrant workers. The politicians came and went away, but I’ll always remember Senators Church and McClure. They were from opposing political parties, but they worked together on important issues. Their example of leadership and statesmanship doesn’t exist anymore, and that’s a national tragedy. Maybe we should return to the days when our elected leaders weren’t afraid to get dirt on their shoes and puke on their clothes as they worked to preserve the land and save the country. I’d volunteer to go along on that ride, with a baggie.