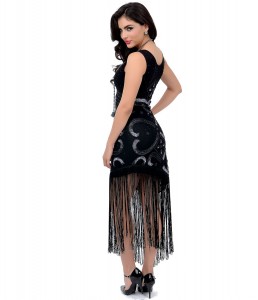 I felt feisty, fun, and a fabulously festive in my new dress festooned with fluttering fringe. The long strands covered body parts that needed to be hidden after years of neglect, gravity, and buttered scones, but the swaying material allowed gratuitous glimpses of legs that once rivaled the gams in pinup posters hung in greasy automotive shops across the country. I was one hot grandmother.

I loved my new outfit and eagerly prepared for a night at an elegant soiree. The first trial came when I attempted to pull on a coat to keep me warm against the winter chill. As I wiggled into my wrap, the fringe on the sleeves of the dress snagged, bunched, and clumped until I resembled an irritated pig wrapped in twine. Stray strands knotted around my neck and hiked the back of the dress over my butt. This was not a pretty vision, and I began to feel less glamorous.

After waddling to the car, I proceeded to the party where I encountered more challenges and calamities. Removing the coat revealed a tangled mass of disheveled strands that seemed to be embroiled in a fight-to-the-death fringe battle. I clawed at the material in a desperate attempt to untangle the hairball that was consuming my outfit. Once adjusted, I walked slowly through the venue so I wouldn’t disrupt the delicate free flow of the garment. Static cling became the new enemy. At any given moment, a rogue fringe would leap out and adhere to the pants of a tall handsome stranger. At least my dress had good taste. 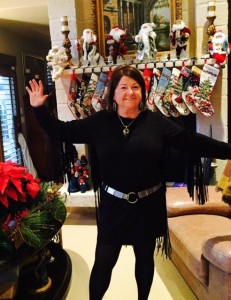 The evening progressed nicely, and I enjoyed gushing compliments about my attire. I assumed the worst was behind me and celebrated with several glasses of fine Cabernet. After a few hours, the wine needed to exit the body, so I sashayed to the restroom. This call of nature became a cry of the wild.

I proceeded to gather the fringe in a ball around my waist so I could sit and assume the position. It became apparent that wasn’t any chance to control what seemed like a million independent and defiant strands, and the wine didn’t help my concentration. By the time I finished my duty, I realized there was one more dilemma. One hand was needed to secure and employ the necessary toilet paper.

I shifted the wad of fringe to one side and attempted to secure it with one hand while I fumbled for the paper. The effort was futile. After achieving contortions only accomplished by professional gymnasts in the circus, I managed to drop the paper on the floor and the fringe fell into the toilet. I momentarily lost my mind.

Not one to give up easily, I grabbed more paper, finished the flush, and jumped off the comedy commode. Liquid dripped onto the floor from wet stripes of sorry, violated fringe so I grabbed sections to squeeze the excess moisture. Soon my hands, my dress, and the entire bathroom reeked of toilet water. I washed and dried my hands, took a deep breath, and joined the party, dripping all the way, leaving a raked pattern of fringe droppings on the carpet.

Reluctant to sit down, I faked my way through the evening and was hesitant to consume too much more wine or water in case there were security cameras around the bathroom and I was prohibited from entering. When it was time to leave, I wrapped my coat around my shoulders so I wouldn’t need to repeat the torment of the sleeves.

At home, I removed the dress, buried it in the dry cleaning bag, jumped into my dowdy but fringe-free jammies, poured a glass of wine, and relaxed in comfort. I may donate the dress to charity and allow someone else to enjoy its charms. But, for a brief moment in time, I felt festive and fashionable and those sweet memories will last long after the humiliation is gone. As for future fashion choices, I’ll avoid the fringe element of society.