You are here: Home / blog / Hallucinating with Storybook Friends 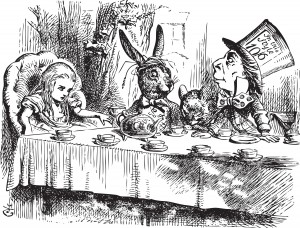 I recently experienced a knee injury so painful that I sobbed until tears and snot covered my face, and I ignored my mother’s admonishment to wear fancy underwear before going to the hospital. After x-rays confirmed damaged ligaments, a doctor who appeared to be 12-years-old prescribed an assortment of painkilling medicines. I wanted to adopt him because the wonder drugs were magnificent.

I had been proud of my ability to avoid illegal drugs, even while growing up during the sixties and seventies, but after experiencing the magical pills I wondered if my pious virtue and self-discipline had been overrated. As Studley drove us home from the hospital, I enjoyed my own private trip.

I noticed a large white rabbit sitting in the back seat and recognized him as one of the characters in the book Alice’s Adventures in Wonderland, a childhood favorite.

Then I looked out the window and saw the Cheshire Cat grinning in the night sky. His head turned all the way around and I laughed with delight.

“Look! The cat is winking at me!” Studley kept driving.

We arrived home and Studley wrestled my incapacitated body out of the car, into the house, and onto the bed. By then, there was an entire tea party floating around the room. Alice looked at me with a sigh of boredom and begged me to get up and play. The Dormouse scolded Alice for being bossy so the Mad Hatter and the White Rabbit pushed his head into the tea pot. I laughed and laughed. 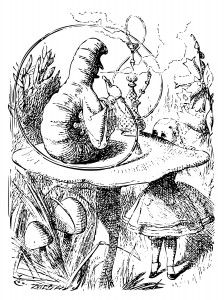 I noticed the Caterpillar sitting on a pillow smoking a hookah. He offered me a toke but I told him I’d never inhaled. That statement caused guests at the party to spit out their tea, and I felt silly. Just then the Queen of Hearts ran into the bedroom waving a big ax.

“Off with her head!” she screamed.

I jerked, and the involuntary movement caused a shooting fireball of pain to rip through my bandaged knee and ignite the nerve endings in my leg. I hollered for Studley, and he came running so fast he almost spilled his gin and tonic.

“What’s the matter?” he asked. “Do you need more pain pills?”

“Yes, yes,” I gasped. “And paint the white roses red so the queen won’t cut off my head!”

Studley patiently read the instructions on the pill bottle and considered gulping a few but decided I needed them more.

“You should wait two more hours,” he said.

I clenched my fists and snarled. Studley feared for his life.

“I need. Another. Pill,” I growled with the intensity of the possessed girl in the movie “The Exorcist.”

By then Studley was reminiscing about his single life, just a short five years ago. Nothing had prepared him for life with a writer whose imagination was prone to hallucinations and fantasies, even while sober. The pain meds introduced a whole new level of crazy.

He gulped his gin and bravely offered three ibuprofen tablets.

“Take these,” he suggested. “They’ll help until it’s time for the hydrocodone. Remember, this prescription is a narcotic related to opium.”

“But look at the Caterpillar,” I wailed. “He’s smoking a hookah on your pillow!” 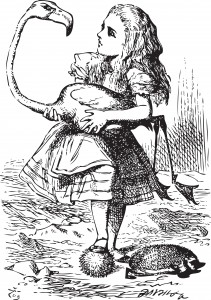 Studley nodded and left to fix another cocktail. That’s when a pink flamingo peeked from underneath the sheet. He whispered that he needed to hide because Alice wanted to use him as a croquet mallet. I promised and pulled up the sheet.

I vaguely remember falling down a hole lined with red roses. The queen should be happy with that, I thought. Then everything went black. I know that the flamingo stayed underneath the sheet because I could hear him snoring and moaning all night.