You are here: Home / blog / Have You Laughed 17 Times Today? 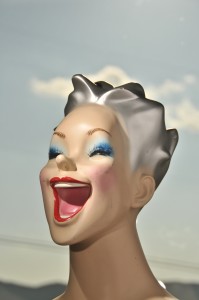 What’s with all the gloomy people walking around mumbling and complaining? Don’t they know that laughter is the best medicine? Boisterous laughter is the grand cure that causes your face to contort as you make guttural noises and your eyes water, your gut tumbles, and your mood improves. There is no down side to a good laugh, unless of course it’s at a funeral or in a tragic movie or during sex. Don’t do that.

The world may be boiling in a cesspool of angst, depravity, murder, and disease, but look on the bright side: you’re not getting out alive anyway so you might as well find some humor. I know what makes people laugh: indigestion. Last month I wrote an essay titled “Don’t Fart During an MRI” that was published on The Huffington Post. To date, more than 644,000 people have liked the silly piece and I’m receiving emails of thanks from around the world. The answer to happiness is simple: just fart.

Marshall Brain, founder of How Stuff Works, studied the topic of humor and concluded that human beings love to laugh, and the average adult laughs 17 times a day. Humans love to laugh so much that there are actually industries built around laughter. Jokes, sitcoms and comedians are all designed to get us laughing, because laughing feels good. For us it seems so natural, but the funny thing is that humans are one of the only species that laughs. Laughter is actually a complex response that involves many of the same skills used in solving problems.

Brain notes that laughter is also extremely difficult to control consciously. Try asking a friend to laugh, for example. Most will announce, “I can’t laugh on command,” or some similar statement. Your friends’ observations are accurate — their efforts to laugh on command will be forced or futile. It will take them many seconds to produce a laugh, if they can do it at all. This suggests that we cannot deliberately activate the brain’s mechanisms for affective expression. Playfulness, being in a group, and positive emotional tone mark the social settings of most laughs.

In a serious study on The Science of Laughter published by Robert Provine in Psychology Today, researchers noted that jokes are serious business: they’re innate, important social tools. Authorities from the Bible to Reader’s Digest remind us that “laughter is the best medicine.” Print and broadcast reporters produce upbeat, often frothy stories like “A Laugh a Day Keeps the Doctor Away.” A best-selling Norman Cousins book and a popular Robin Williams film Patch Adams amplified this message. Laughter unites people, and social support has been shown in studies to improve mental and physical health. Indeed, the presumed health benefits of laughter may be coincidental consequences of its primary goal: bringing people together.

Here’s one final thought from Andrea F. Polard, Psy.D, in an article in Psychology Today titled “A Unified Theory of Happiness.” She writes, “We must see life as a divine play and foster lightheartedness. In order to survive, we must play.”

So, turn off the computer, go buy some clown noses, gather some friends, and go play. If that doesn’t work, just fart.