You are here: Home / blog / Knocked Down and Laid Up 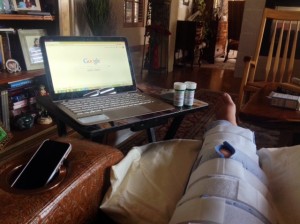 For the past six weeks, I’ve followed a rigorous ritual every morning: I strap on a knee brace, grimace in pain, swear, and then hobble to the kitchen for coffee because it’s too early for booze.

I’m in pain because I have a torn meniscus over a cracked bone in my knee and open, festering burn wounds on both legs. The pathetic reality is that I did all this to myself, and the pain and indignity is souring my sweet disposition.

The injured knee was caused when I gallantly attempted a wicked exercise known as the Speed Skater in a high-impact circuit class with women half my age. I boldly leaped sideways into the air and for a brief moment in time resembled a graceful skater. Then gravity won as I fell to earth, twisted and sprained my knee, and was reduced to a bumbling blob of middle-aged misery. I thought that I could do the same intense workout as the youngsters. I was wrong. My defiant body said, “Not no, but hell no!”

Two weeks later, I stumbled on the weakened knee and tore the meniscus and somehow cracked the bone. More x-rays, more drugs, more visions of chattering white rabbits running through the house. I swore that all the characters from Alice’s Adventures in Wonderland were cavorting around my bedroom. At least it wasn’t the cast from Silence of the Lambs.

But wait. It gets better. While resting my leg on ice to reduce the swelling, I froze the back of both legs. The skin turn black and peeled off, leaving gaping open wounds behind my knees. The frozen burns were so bad the orthopedic surgeon postponed the scheduled knee surgery until the wounds healed. So I returned to my recliner to nurse the torn meniscus, broken bone, and serious burns. My butt is now the same shape as the chair.

Note to self: Obey the instructions that say to place a towel over the ice and remove the ice every twenty minutes.

Second note to self: Blaming the burns on hallucinations caused by the delightful painkiller drugs does not excuse ignorance of basic first aid techniques. 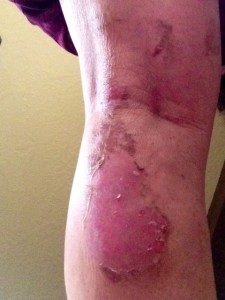 I tried to explain my predicament to my sweet granddaughter, but all she heard was the word “frozen.” She immediately burst into songs from the animated movie until I threatened to club Olaf the Snowman with my crutch. No, I don’t want to build a snowman. Just let it go. And take your silly reindeer and singing sisters with you.

I couldn’t see behind my knee so I asked Studley to apply ointment to the burns. I yelped in pain as he smeared me with salve and bandaged the wounds. All the while he was muttering about always wanting to rub lotion on my body and tie me to the bed. I think he was joking.

The surgeon finally cleared me for surgery so next week I’ll have the arthroscopic procedure. I’m anticipating more happy pills and sedation that will help me forget that holes are being drilled into my knee and a tiny knife is scraping around inside among the nerves, bones, tissues, and debris.

As long as the surgeon is in there, I wonder if he could do a little internal sculpting on my thigh. It’s close to my knee and needs a little pruning. These legs will never again attempt to master the Deadly Speed Skater of Doom, and my dreams of competing as an Olympic skater have been smashed by the reality that I never could skate, I’m too old, and I look absolutely dreadful in a Spandex body suit. Also, now I have a profound aversion to ice…unless it’s in a smooth Scotch.