You are here: Home / blog / Lessons I Learned from my Mother 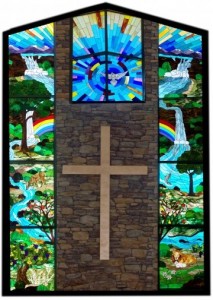 Several years ago, my mother commissioned and helped design a two-story wall of stained glass windows for the new Presbyterian Church in Wendell, Idaho. A prominent member of the church objected to the design because it included a rainbow and, as everyone knows, that could endorse the gay rights agenda. My mother remarked, “The rainbow was good enough for Noah, so it’s good enough for me.”

The rainbow design was enlarged and the magnificent windows were carefully installed in the sanctuary. On certain hours of the morning, the sun shines through so brilliantly that some people in the congregation need to wear sunglasses. The person who objected to the design has moved away, but I do hope someday she can witness a spectacular rainbow and be humbled and thankful. No agenda is necessary.

Mom didn’t want or need to support or condemn the gay lifestyle or any lifestyle, for that matter. Instead, she chose to follow the teaching of Jesus and endorsed his commandment to “Love one another.” Her worn-out Bibles were covered with underlined verses, mostly about love and grace. A favorite passage came from the book of Hebrews in the Old Testament: “Keep on loving one another as brothers and sisters.” She followed that advice, often to her own peril as people took advantage of her generosity.

Her funeral will be next Tuesday in the church, and I hope the sun shines through the stained glass and illuminates the place of worship that will be her final stop before the graveside service. If the sun doesn’t shine, maybe it will rain and then we’ll see a rainbow. Either way, we’ll know she helped design the day because she’s in good and powerful company.