You are here: Home / blog / Friends and Wine get Better with Age 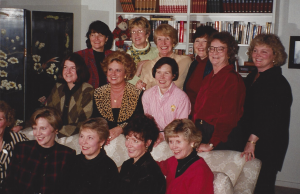 I recently attended a garden party with a dozen feisty middle-aged women. We all once worked for Boise Cascade Corporation, and as our lives have evolved, most of us are still jumping in and out of hot water when we should be lolling around at a fancy resort sipping fine wine and receiving a massage from a bodybuilder named Thor.

We pulled out a 20-year-old photograph of our group. I’m shown in the middle row during my “argyle phase.” Since the photo was taken, we’ve shared and endured numerous parties, divorce stories, weddings, anniversaries, excursions, empty nests, the births of grandchildren, and the deaths of parents. We often go years without seeing each other, but when we get together, merriment ensues as we provide the necessary updates about our vintage lives.

Linda was widowed after her husband died unexpectedly. Determined to take care of herself, she closed up their winter Arizona home and drove by herself back to Idaho. She arrived at 1:30 in the morning, only to discover she didn’t have the key to open the door.

“It was always his job to do that!” she explained.

Exhausted after the thirteen-hour drive, she did what any resourceful woman would do. She took a hammer from the tool box in her car and broke down the door.

Another friend, Sue, described how she was petitioning the court for guardianship of her teenage granddaughter because of the mother’s chronic drug abuse problems. “We were all set to enjoy our retirement,” she said. “Now we have a teenager in the house. But, we’ll make it work.”

One of my oldest friends, and I mean old by the number of years we’ve been acquainted, is Carol. She announced that she has developed heart disease, the number-one cause of death for women. We immediately shared hugs and started to wait on her every need. She remarked that she should have mentioned the disease years earlier. She’s doing fine, but her health alarm is a reminder that life is fragile and getting older is a privilege denied to many others.

“Stop having heart disease,” I said. “I don’t want to feel guilty about all the wild times we’ve had together. We left the corporate rat race, and now we deserve to sit by the pool wearing colorful outfits and floppy hats while we whistle for more drinks.”

She nodded in agreement. “I’ll meet you poolside anytime. But, we’ll alternate libations with lemon water.”

Another friend told us about being diagnosed with Type 2 diabetes. We encouraged her to take care of herself, and then we arm-wrestled her to remove the cookies from her reach.

“If we aren’t allowed to enjoy an abundance of sweets, why do cookies come by the dozen?” she lamented. We shook our heads and muttered in communal sympathy.

I tried to lighten the mood by describing how my elderly mother burned up her microwave by using it as a timer and then unknowingly gave my daughter a toy that spewed recorded obscenities. We weren’t making fun of her because we knew we’ll probably be doing the same things in twenty years.

A few women described the challenges of caring for a sick parent. Instead of sharing details about the latest shoe sale or coming concert, we traded suggestions, anecdotes, and recommendations for eldercare facilities. Most of us had lost at least one parent, and the surviving spouse was alone. Except for Sue’s mother who is known as the incurable flirt at her retirement center. We decided to copy that example.

After listening to each other’s circumstances, we agreed that we would make the most out of the last third of our lives. Molly announced that she was resigning from her job after working for 30 years and was planning her retirement. We toasted her with Pinot Gris and poppy seed cake. One woman was eagerly anticipating the birth of her first grandchild. The other grandmothers in the group all chimed in on the wonders of being a grandmother. Of course, we all pulled out photographs and declared that the world would be a better place because of our perfect progeny.

For over twenty years, we’ve shared the highs and lows of our interesting and varied lives. And because wine is an excellent preservative, we hope to continue the reunions for several more decades. As we left the party, we all vowed to carry a hammer, just in case we had to bust down a door.