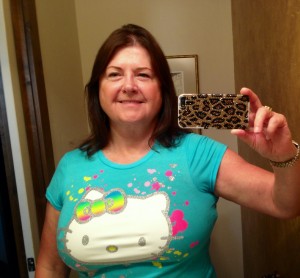 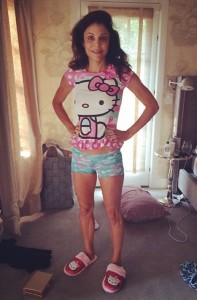 Skinny reality-TV starlet Bethenny Frankel recently posted a photo of herself wearing her 4-year-old daughter’s kitty pajamas. She looked cute. I wiggled into my 7-year-old granddaughter’s t-shirt from the same brand. I looked like a sweating stuffed sausage from a midlife horror movie. The scaredy cat stretched across my ample bosom yelped “Goodbye!” instead of “Hello.”

I almost coughed up a hairball reading about the cat fight that ensured on social media as women howled their outrage at Frankel. The fur started to fly when according to some, the anorexic actress was exploiting her little girl. Others meowed that she was forcing her child to compete with her. This wild cat of an inadequate parent was destroying the self-image of girls and fluffy kittens around the world.

Some allowed their claws to come out and ripped her to shreds on Twitter. They accused the tiny want-to-be actress of eating like a mouse and encouraging bulimia. I suspect that many of these cat-calls came from those with an excessive body mass index, so I stopped reading the comments and moved them to the litter box. Such unwarranted outrage left me scratching the couch. Get a life, already.

For more than thirty years of my adult life, I’ve witnessed the unnecessary vitriol exchanged between women. Before I fade away into the genderless old folk’s home, I’d like to see women celebrate each other instead of fighting like felines in heat. Really, it’s okay if a reality show star wants to wear her kid’s clothes. Those who are foaming at the mouth in disgust need to watch the news to learn from the legitimate reality shows about what really matters. Wars, famine, abuse, stupid politicians – these are all far worse than Bethenny Franklel wearing Hello Kitty slippers.

When I returned the t-shirt to my granddaughter, she asked to wear my old outfits for dress-up clothes. We were delighted as she pranced about in the discarded power dresses of my past life. And, to my knowledge, not one other 7-year-old criticized her for wearing my clothes. Perhaps there is hope for the younger generation.