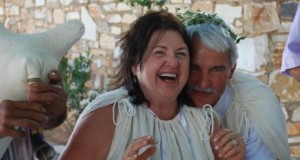 Nothing screams “pathetic loser” more than being a middle-aged divorcee alone at a festive party where beautiful couples are trading sloppy kisses and giggling like demented clowns. There’s not enough spiked punch in the world to soften the pain of pretending it doesn’t matter. Many of us graze along the buffet table hoping the crunch of nachos will be louder than the boisterous laughter of young lovers, and then we migrate to the bar because all we get to take home is a headache.

We never intended to be divorced at midlife because we were programmed to believe the happily-ever-after deceptions that provided easy and convenient endings in fairy tales. But according to a recent study by Bowling Green State University in Ohio, the divorce rate among people age forty-six to sixty-four has grown more than 50 percent. Almost one-third of baby boomers are single, either by divorce, separation, or having never been married. Some are attracted to the single lifestyle while others would trade their original Beatles record collection for some hot passion.

I have several friends who have been married to their first husbands for more than thirty years. They’re happy and comfortable and couldn’t imagine dating at this stage of life. And if something drastic happened to their husbands, at their ages they would rather join a cloistered convent than get naked in front of another man. They wouldn’t want to worry about unpredictable, middle-aged dilemmas such as the sudden crazy mood swings and chronic irritable bowel syndrome that could make for an awkward first date.

A few years ago, when I was divorced and my children were grown, some friends invited me to dinner. They just happened to have a recently divorced guest who was visiting from another state. I never turn down a free meal, so I agreed to join them. I met him and instantly felt a connection. He was in his fifties and ruggedly handsome. At dinner, our knees touched under the table during the salad course. We laughed at silly jokes during the entrée, and by dessert, he was feeding me bites of cheesecake. I felt like a goofy teenager.

This marvelous man met all my requirements: He was middle-aged, single, and didn’t wear white socks with sandals. (At my age, you can’t get too picky.) As an added bonus, though, he was smart, employed, passionate, spiritual, and he wanted to know about my children. It was like winning the Publishers Clearing House Sweepstakes, the lottery, and top-shelf wine at happy hour all at the same time.

We spent four days together, often to the chagrin of his abandoned hosts, and then I took him to the airport. It was a scene out of Casablanca, complete with winter fog and drama. He held me close and whispered, “We’ll always have Boise.” Then he tipped his hat, sauntered through security, and hollered, “Here’s looking at you, Kid.”

I drove home, wondering if he remembered my real name wasn’t Kid. But it didn’t matter. I was smitten, and it felt good. To paraphrase a quote from the movie, of all the towns in all the world, he walked into mine. He called when he landed at the next airport and was about to change planes. “I think this is the beginning of a beautiful relationship,” he said.

And, yes, at that moment we were Humphrey Bogart and Ingrid Bergman but without the horrible Nazi and depressing farewell-forever scenes.

We enjoyed a long-distance relationship over the next few months. Then my more-than-significant other, whom I appropriately named Studley, got a job in Idaho, and to show my ultimate commitment I willingly made some room in my closet. We married on the Greek island of Paros on my birthday so he only needs to remember one important date. We daily express our total gratitude about receiving another chance at love, and it’s a powerful feeling. Now, when I experience hot flashes, I know it’s not just menopause. Thanks, Studley.

(This blog contains excerpts from my book Midlife Cabernet.)