You are here: Home / blog / Mother at the Door

Today would have been my mother’s 92nd birthday. She died in 2014, lost in dementia and crippled with physical and mental pain. As she was dying, I played Tennessee Ernie Ford singing about “Peace in the Valley,” and I wept for the loss.

Starting when I was in high school, she always stood at the front door whenever I left. She would wave until I was out of sight. This continued for several decades until she was confined to a wheelchair. Then she would roll her chair to the window and watch for me to come. After she was no longer mobile, she would hold onto my hand and beg me to stay longer. I should have stayed. 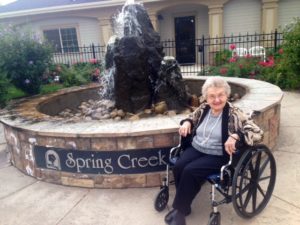 We had opposite personalities and aspirations. She was shy and insecure. I was noisy and confident. She was subservient to my father and assumed her status without complaint. I didn’t want to take that role, so I didn’t. She was so unsure of herself in public, she had trouble ordering from a menu and usually got what I ordered. After dad’s death, she gave money to her children and charities until there was nothing left to give. I have learned the hard way to say no to those who take and ask for more. I did continue her tradition of standing at the door for my children. I waved and flashed the lights until they were out of sight.

Even though Mom and I were not alike, we still loved and respected each other. She would attend my speeches and performances and sit near the front. I organized birthday parties for her and wrote her Christmas letters. In the final years of her life, I drove her to doctor’s appointments and wrangled her wheelchair, helped make her the guest of honor at family celebrations, and moved her several times after various stays in rehabilitation facilities. I wrote our names on family photographs as she began to forget us. At the end, as I sang to her, she slipped into a coma and stopped holding my hand. 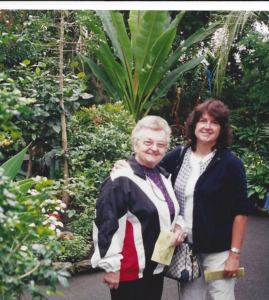 No one stands at the door anymore, and I usually drive away and don’t look back. But I often have a fleeting image of my mother, smiling and walking in peace through a valley. She’s waving at me.