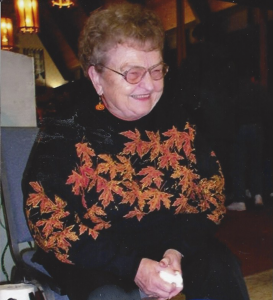 My mother died on November 1, so this is our first Thanksgiving without her. To make the occasion less painful, I’ve decided to think of funny things she used to do before dementia took her away. For space constraints, the long list has been pruned to only six memories.

This Thanksgiving, the family will come together to toast the holiday and give thanks for our abundant blessings. Some things will remain the same: commotion will come from the children’s table, the men will wrestle for the last turkey leg, and I will declare that red wine goes with turkey – and everything else. The most noticeable difference will be the empty chair at the table. Happy Thanksgiving, Mom. Maybe I’ll sneak a bowl of sweet potatoes for you. Thanks for the funny memories.