You are here: Home / blog / Start Your Own Easter Parade 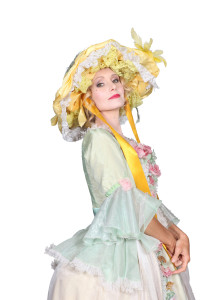 In the 1880s, the Easter Parade became the spring “to do” festivity for people bored with winter and ready to show off their finery. The occasion began as a procession in Manhattan from various churches after religious service to commemorate Easter, the most important holiday observance for Christians. The after-church traditional walk evolved into an exhibition of the latest trends in fashion.

Those from the less affluent classes lined the streets to watch the well-dressed procession saunter down the avenue. Local retail establishments saw the Easter Parade as a commercial opportunity and dry goods merchants and milliners publicized their new wares on the prominent people. By the turn of the century, the commercial scene provided through the Easter Parade equaled the Christmas season for successful sales.

American songwriter Irving Berlin worked for 15 years on a song he finally called “Easter Parade” and introduced in 1933. The lyrics were relatively simple, but the song became an instant hit as he promised ladies “in your Easter Bonnet, with all the frills upon it” that they would be the grandest lady in the parade. The song was later used in the final number in the hit 1948 movie “Easter Parade” staring Fred Astaire and Judy Garland. The classic movie contained 17 songs written by Berlin, and it should be added to your movie wish list.

During my childhood, we didn’t have any Easter parades in my small hometown in Idaho. But the children were dressed in their best clothes, the parents brought out their best Sunday-meeting attire, and families proudly appeared in church. In a photo from 1958, my two brothers and I were posed in front of our car before we left for church. My mother knew to quickly take the photograph because my white socks, white Mary-Jane shoes, frilly dress, and white hat had a high chance of becoming dirty within the hour.

Twenty years later, my daughter was born the day after Easter and came home from the hospital in her first Easter dress. Now, my granddaughters dress up in their new clothes, complete with frilly dresses and perky hats. Photos are taken, Easter brunch is shared, and candy is consumed because it’s been too long since the sugar rush of Valentine’s Day. Some go to church, some don’t, but we celebrate together as a family.

This year I intend to line up my five small granddaughters in their elegant dresses, and we’ll have our own Easter Parade. It won’t be 5th Avenue, but it will be a grand procession. If they’ve been extra good, I’ll surprise them with parasols. For a brief moment in time, we’ll be refined and fancy.