You are here: Home / blog / Thanks, Mom! My Blog is a Winner 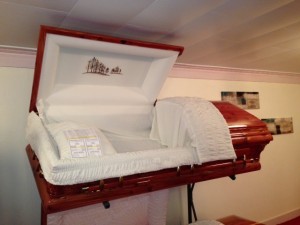 Thousands of entries were submitted by both content creators themselves and their fans and were reviewed through a juried process, winnowing the list down to a mere 5% of submissions that will be honored.

The honor is bittersweet because my winning blog is titled “My Mother’s Body Got Lost.” She’s smiling at me, still.

Here is my winning blog: My Mother’s Body Got Lost

I’m trying to plan my mother’s funeral, but we have a problem. We can’t find her.

My mother passed away Saturday after a long illness. I had all the funeral arrangements planned months in advance, so I was prepared when the inevitable happened. After she died, I contacted the proper authorities to transport her body 100 miles to her hometown of Wendell, Idaho for the funeral and burial. Some things don’t always go as planned. Two days later, we know that the body is gone from her assisted living facility but it’s not in Wendell. This is a cause for concern.

During the past few years, my mother has been lost in dementia. Even after moving her to a secure nursing home in Boise, there were times when I visited and couldn’t find her. The staff and I would search the facility and find her in someone else’s room and the two residents would be talking about their old times that never happened. No harm was done, and we gently, lovingly participated in their storytelling. But, I always knew she was somewhere inside the building.

Today I called the funeral home in Wendell and they hadn’t received the body. How do you lose a casket? I thought I had completed all the necessary arrangements, but I wasn’t familiar with the procedures for this dilemma. I used my inside voice and calmly requested that somebody do something. I called back an hour later and needed to employ my outside, aggressive tone. This last resort has been known to get immediate results and leave people trembling. I’m not proud of this trait, but it works.

“Of course she is,” I responded.

I hope she had a nice weekend and enjoyed having the last word. But, Mom, now it’s time to go home. Please.

Planning a funeral is similar to planning a wedding. Family and friends come together, some cry, music plays, and people wave goodbye. Except, at a funeral, the goodbye lasts a long time. This last momentary interruption is my mother’s way of telling me I’m not always in charge of everything. Somewhere, my parents are laughing.