You are here: Home / blog / The Bad Knee Need for Speed 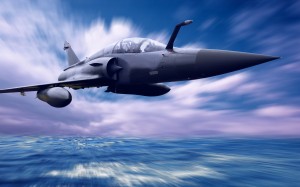 After suffering a serious knee injury, I numbed the pain through the wonders of legal narcotics. Then the doctor upgraded my drugs to a more potent dosage because my eyes kept rolling back in my head as I bit through broom handles. This new potent medication had the power to turn me into a fierce fighter pilot.

Soon after gulping the pills, I magically appeared at the controls of an F-14A Tomcat jet careening into the Danger Zone as Kenny Loggins sang in the background. It was quite the rush. After performing several death-defying maneuvers, nose-bleed-causing spirals, and winning a dog fight with several Russian MiGs, I sent a sassy radio message to Top Gun Headquarters:

“Tower, this is Ambrose requesting permission for a flyby.”

The answer was succinct.

“Dammit, Ambrose, get down off the counter.”

The voice sounded like Studley but I knew it couldn’t be him because I was flying at Mach 2 – almost 1,550 miles per hour – twice the speed of sound. And he was back home making dinner because I was too helpless to assist. Unless, of course, I became a fierce fighter pilot. Then I had a good excuse to heed the call of duty because I felt the need for speed.

“Ambrose, get down!” The voice was more persistent so I put the jet on cruise control and lifted the visor on my helmet. I saw the blurry image of Studley helping me sit down in my recliner. Suddenly the jet vaporized in a puff of steam.

“Where did you go this time?” he asked, almost afraid of the answer.

“Just playing with the boys,” I answered. I heard Kenny Loggins again but I think he had moved to the back yard.

Studley sat down beside me and shook his head.

“I made spicy meatballs for dinner,” he said.

“Great balls of fire,” I sang as I pounded on an imaginary piano. Then, sensing his annoyance, I broke into a dramatic and romantic rendition of “Take my Breath Away.”

At this point, he muttered about buying a motorcycle so he could ride away beside a distant ocean. So I searched for the pill bottle because I wasn’t finished with the volleyball game.