You are here: Home / blog / The Great Potato Debate: Idaho Vs. Maine A recent poll revealed that Americans are more divided than ever during this Thanksgiving week. Perhaps most contentious is the debate over which potatoes to serve: Idaho or Maine.

Holiday meals won’t be complete without a cube of real butter melting in the center of a heaping bowl of mashed potatoes next to an industrial-sized pitcher of homemade gravy. These simple pleasures make life worth living.

My grandparents and parents were potato farmers in Idaho, and I knew that the state produced the best spuds in the world. Recently that opinion was challenged when I met Molly Stevens, a humor writer from Bangor, Maine. She’s proud of her state’s potatoes and had the audacity to send me a list of reasons Maine spuds are better than Idaho potatoes. Her half-baked view fried my tater tots, and I considered mashing her list of reasons into a stew of discarded peelings. But, I decided to vegetate on the harvest of ideas and hash over the rebuttal to her dig. We met at the Erma Bombeck Writers’ Workshop in Dayton, Ohio, and proceeded to duplicate the “shrimp scene” from the movie, Forest Gump.

“We like our spuds baked, mashed, fried, scalloped, in salad, and grilled,” I said.

“Well, we like ours so much we have twice-baked spuds, and we add them to casseroles, soups, stews, and hash,” she answered.

“Everyone knows that Idaho potatoes make the best potato chips, pancakes, and gnocchi,” I replied.

“Well, have you ever eaten loaded skins made from Maine spuds or dropped them into a pot at a crab boil? You’ll fall on your hoe and declare that we have the better potatoes.” Molly was passionate about her potatoes.

To offer a balanced debate on the fate of the great potato, here are our facts, beginning with our formidable childhood work in the fields:

Molly: I grew up on a potato farm in Northern Maine and started picking potatoes when I was five years old. I got to drive the tractor until ‘The Incident’ when I drove the tractor over the bank taking a wide turn at the end of the row. Luckily there was no rollover to recall but I can still hear my Dad shout “Balls!” which was his go-to word when he was upset and the harshest language I ever heard him utter.

Elaine: I grew up on a potato farm outside the village of Wendell, Idaho. Schools were closed for two weeks in October so everyone could help with the harvest. My job was to stand on the back of a lumbering harvester pulling weeds, vines, and rocks off the spuds as they tumbled over rattling chains into the trucks. The job brought added challenges of dirt, wind, noise, and cold temperatures, but no one complained. Children in those days were hungry to work because the parents usually said, “No work. No dinner.”

Molly: The staple on our table morning, noon and night was the lowly and delicious potato. I was vaguely aware that another state in the union touted itself the top potato grower. According to my jigsaw puzzle of the United States Idaho was way out west, bordering Montana. I didn’t worry too much about competition from the Idaho potato because I knew from the Maine Potato Board that Maine potatoes were better and the first reason is because of the superior seed. Dad grew Maine potatoes from the best seed possible because he raised his own and Dad didn’t do anything less than excellent.

Elaine: Maine doesn’t have that much volcanic soil, mainly because the state’s volcanoes haven’t erupted for millions of years. Idaho is a virtual hot bed of volcanic action and the last large eruption was only 5,200 years ago, right before I was born. The resulting rich soil produces potatoes that taste better, last longer, and offer a more pleasing texture. We purchased seed potatoes from eastern Idaho, the True Territory of the Tuber.

Molly: Maine has more experience because we’ve been producing potatoes longer than any state in the nation. Do you want to eat a potato that hasn’t learned from its mistakes through the years? Don’t you think the less experienced potato would taste wet behind the eyes?

Elaine: Maine’s harsh winters are why no one wants to live there. I’ll take pesky critters over frozen nose hairs any day.

Molly: We don’t need irrigation to force growth, unlike the dry desert fields in Idaho.

Elaine: Irrigation captures the fresh water from the mountains and turns southern Idaho into fertile farmland. Harnessing the water continues to provide thousands of jobs and produce world-famous crops. And we don’t need to deal with that pesky sea salt blowing in from the Atlantic.

Molly: Our potatoes have less of a “wild” taste because we’re pretty tame here in Maine, unlike the wild west of Idaho. We calmly enjoy creating the perfect vitamin-packed, energy-rich vegetable perfect for any meal.

Elaine: True, Idaho is wild. And, big. We produce 320,000 acres of potatoes equaling 13 billion pounds every year. Idaho covers more than 83,000 square miles and is big enough to eat the state of Maine (36,000 square miles) for dinner and then gobble the states of Vermont, New Hampshire, Connecticut, Maryland, and Massachusetts for dessert. We’re wild like that.

Molly: Maine wins because of our humility. Idaho surpasses Maine in extolling the virtues of their potatoes with a huge advertising budget. Maine, on the other hand, thinks that the flavor of our potatoes is all that is necessary to market our superior product. Thus every bite of a Maine potato includes a serving of humility.

Elaine: You’re correct about the humility. We openly brag about our spuds and have a six-ton potato touring the country on a truck. We also enjoy the Famous Idaho Potato Bowl football game, the country’s best Potato Museum, and the sexy Idaho Potato Drop on New Year’s Eve. Not one ounce of humility is used in the creation and promotion of these events.

Molly: Our potatoes have thick skin. Living in Northern Maine is not easy with its harsh winters and remote location. This makes our potato grow a thicker skin, which is much less vulnerable to bruises and blemishes during harvest and shipping. 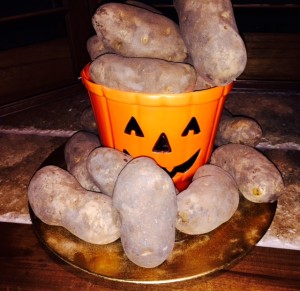 Elaine: The skin on an Idaho potato can be brown, gold, purple, or red. This colorful array of delicious, nutritious food makes the centerpiece for a healthy meal. If the skin isn’t as thick as yours, that just makes it easier to peel.

We decided to end the debate because we were getting hungry. We’ll continue our research and try various recipes using the illustrious potato. I’ll concede that Maine offers other great food items: lobster, clam chowder with black bread, and Whoopie pies. Idaho has potatoes.

The only fact we agreed on: friends don’t allow friends to eat instant mashed potatoes. This nasty product is made from dehydrated inferior potatoes mixed with sodium bisulfate, citric acid, and BHA to preserve color and flavor. BHA is short for butylated hydroxyanisole, and some studies indicate it may be a carcinogen. Other ingredients in instant potatoes can include hydrogenated oils, corn syrup, silicon dioxide, and other mystery chemicals. Don’t buy or eat this fake food.

Here’s to a festive holiday meal, highlighted with a steaming bowl of real mashing potatoes. Forget any contentious debates, and eat, drink, and be merry.