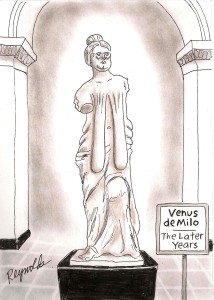 Gravity is the phenomenal force that keeps the moon in orbit and eliminates the chance of us floating off into space. A less attractive fact is that gravity has relocated my once-perky breasts down near my knees. It’s only a matter of time before I’m pushing them in a cart.

Gravity also has other devious features. When I step on a scale, the scale reads how much gravity is acting on my body. Apparently, I attract a great amount. It’s also the reason I frequently trip on a tiny hair and fall down, usually in a public place. The force comes into play every time I attempt to balance on one foot in yoga class and my tree pose topples to the ground. Obviously, gravity is not my friend.

I didn’t pay attention to the sagging boobs issue until I noticed in photographs that my youthful hourglass shape had settled comfortably into a rotund grandfather clock. Instead of retaining my splendid, 20-something physique, I was regressing to the toddler stage with thin hair, pudgy belly, clumsy walk, and the need for a nap. This realization made me crave a bottle; one that wasn’t full of milk.

A scholarly research of medical facts taught me that breasts naturally sag because the ligaments break down as the collagen and elastin lose the will to get up in the morning. I found a more nasty explanation that age causes dense glandular tissue is be replaced by fat that is more likely to droop. Ultimately, two of my best assets had become fat-filled tittie tubes.

In defiance, I purchased industrial-strength bras with pulley-system straps that could ratchet the migrating mammary glands off my belt. However, this caused my ta-tas to resemble military missiles ready to launch and clothes to drape like a cheap holiday cloth over a sturdy buffet table. Due to my grotesque, matronly profile, I could set a book and a full wineglass on my uplifted chest. So I did.

Further research explained that physical exercise won’t redeem the wayward jugs. Push-ups couldn’t reduce the droop because breasts are made of fat not muscle, so I decided NOT to attempt 100 push-ups every morning. Other causes included smoking, which I’ve never done, and sun bathing, which I’ve never done in the nude, in compliance with obscenity laws. High-fat diets can contribute to sagging boobs, but then what’s left of life to enjoy? One cannot live by wine alone! Would this bosom bounce back to where it belonged if I didn’t butter my corn or drown my warm berry pie with ice cream? I think not!

A friend who specializes in homeopathic treatments brought me a list of the top ten top home remedies for firming sagging breasts.

“Try these suggestions,” she murmured gently as organic bean sprouts appeared from her naturally-curly hair and a mist of lavender puffed from her youthful pores like glitter in a unicorn’s breath.

I dropped my nachos and cocked my salon-treated mess of a haircut. “Let me get this off my chest,” I said. “My rack has fallen and can’t get up. Your potions and lotions won’t help.”

“Your negative energy is blocking your healing chakra,” she said, her voice matching the perfect pitch of a dove’s coo. “Meditate on lifting your soul so the spirit realm can help revitalize whatever brings you down.” She turned to go and seemed to vanish in a cloud of non-allergenic fairy dust.

I opened a Cabernet and practiced positive thoughts as I sipped and read her list. One technique involved massaging olive oil gently over the breasts for 15 minutes to increase blood flow and stimulate cell repair. My hubby Studley dutifully volunteered to administer this remedy as often as necessary. He wasn’t so excited about the next suggestion to apply a paste of pureed cucumber and egg yolk because he preferred his salad on a plate. I determined the list was a bust, so I unhooked the constrictions and flung the bindings to the far corner.

“Let them free!” I shouted from the depths of my bosom.

Then I ran naked to the hot tub, mimicking Kathy Bates in the Jacuzzi scene from the movie About Schmidt. Incidentally, that scene was voted by a men’s magazine as the “Most Ball Clenching Movie Moment of All Time.” Not even Jack Nicholson could keep a straight face. As the warm water caused my girls to float upward, I shook my wrinkled fist and proudly declared, “I am not a victim of gravity or criticism. I am a proud woman with a beautiful body, and you can kiss my attitude.” I smiled and felt buoyant.