You are here: Home / blog / Writers as Instruments of Peace 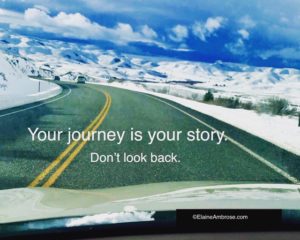 Can a group of Idaho writers help bring respect and civility to a country polluted by vitriol and criticism? Yes, they can. We proved it over the weekend.

During the past 12 years, I have organized more than 20 writer’s retreats and workshops. Our recent workshop focused on “Your Journey is Your Story,” and the participants were prompted to share personal experiences that could shape a future blog or memoir. The workshop included a “Music as Muse” exercise as I played different songs and gave writing prompts.

The last music played was Peacemaker by Irish singer Máire (Moya) Brennan. The song included the Prayer of St. Francis of Assisi with the singer’s young son providing words in Irish Gaelic. The words in the original prayer include the phrase “make me an instrument of your peace.” After the music exercise, participants read their works aloud to the group.

The first writer read her story about being thrilled to take her daughters to an event to hear former First Lady Michelle Obama. The writer is scheduled to travel to Seattle in May to hear Hillary Clinton.

Another writer spoke about praying and seeing the face of Jesus.

Other writers included a former Republican state representative who read about patriotism, a mother who spoke and sang about her love for her children, a woman escaping sexual abuse, a student who wrote about surviving after World War III, a humorous memory of a departed relative, and a kind grandmother who shared the pain of being estranged by an adult son. Every speaker was respected and appreciated. There was no drama, no criticism, and no insults.

If ten people from various backgrounds and from ages 12 to 72 can come together to a writing workshop in Meridian, Idaho and value opposite opinions, others can do it, too.

Over the past two years, I’ve winced at the hateful, bitter comments written by associates on social media. These continuing assaults have changed nothing nor have they improved the public discourse. I appreciate spirited debate and have posted several satirical memes about politics, but I’ve never personally attacked anyone. In my opinion, the atmosphere is more polluted with hostile verbal garbage than with plastic bags. 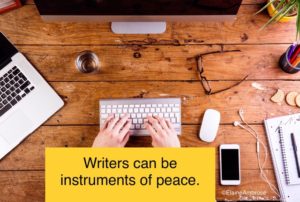 I’m traveling to Las Vegas soon to present a similar writing workshop using music as motivation and inspiration. It’s my goal to inspire attendees, ten people at a time, to use their words, laptops, and pens as instruments of peace.