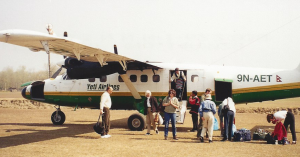 Civilized people are shocked at the reports of the intentional murders of the passengers and crew of Malaysian Airlines Flight 17. What was gained from the evil attack? What admirable show of force was accomplished through causing the naked body of a dead women to fall through a peasant’s roof? Is this all part of an orchestrated, wicked plan to start the final world war?

I don’t have any answers to those questions, but I know this vile act by assassins will not prevent me from flying on airplanes. It’s also dangerous to drive during rush hour traffic in the city or next to a carload of zombies texting and/or drinking. If I want to go from one destination to the other, I know I’m not getting any younger and there is no time to waste. I’ll book a flight.

My most memorable flight was on Yeti Airlines, the “Premiere Airline of Nepal.” I have a photo that shows me praying before I get on the plane. Actually, I say a prayer every time I fly, and the prayer is that the landings equal the takeoffs. I was with a group of travelers flying from Kathmandu, Nepal to a safari in a tented camp. The pilot of the tiny airplane allowed us to come into the cockpit and take photographs of the Himalayas as we flew past. I’ll never forget the breathtaking sight.

I have rich and grand experiences of traveling in airplanes. My father owned a Bonanza four-seater so he could fly between his businesses in several western states. If the family came along, my job was to move the blocks from behind the wheels before we got in. The most important rule: Don’t walk near the turning propeller. I obeyed that rule. I recall one fateful afternoon when he flew the family to California and the extreme turbulence made all of us vomit. My mother used her purse as the barf bag. The last time my father flew solo, his appendix burst but he still managed to land the plane.

Writing feature articles for various magazines allowed me to experience some perilous flights. To report on a white water rafting expedition on the Salmon River, I was a passenger on the mail plane that landed on a mountain pasture the size of my back yard. The pilot blasted an air horn so the deer would get out of the way. For a story on the local Air Force squadron, I rode in a massive KC-135 and watched from the “bubble” as the tanker conducted an in-flight refueling mission at 30,000 feet. I could see the eyes of the pilot in the jet below us.

I’m flying again next week to attend the BlogHer conference in California. And, in November I’m looking forward to an overseas trip to Spain with my husband, daughter, and son-in-law. There are no guarantees in life, so we’ll take our chances. I’m grateful for the traveling opportunities and the extraordinary experiences that have enriched my life and allowed me to travel beyond my hometown of Wendell, Idaho. And if a future landing doesn’t equal the takeoff, I’ll be dead. But my spirit will be in a better place than the afterlife waiting for the murderers who shot down Flight 17.